Many educators are acutely aware that punishment and threats are counterproductive. Making children suffer in order to alter their future behavior can often elicit temporary compliance, but this strategy is unlikely to help children become ethical, compassionate decision makers. Moreover, it models the use of power rather than reason and ruptures the important relationship between adult and child. Of those teachers and parents who make a point of not punishing children, a significant proportion turn instead to the use of rewards. The ways in which rewards are used, as well as the values that are considered important, differ among and within cultures. As with punishments, the offer of rewards can elicit temporary compliance in many cases.

Rewards and punishments are both ways of manipulating behavior. The reason is that while students would certainly like to have the goody itself—the pizza or money or gold star—none of us enjoys having the very things we desire used as levers to control our behavior. Rewards are most damaging to interest when the task is already intrinsically motivating. Instead, we need to examine the task itself, the content of the curriculum, to see how it can be made more engaging.

Regardless of what we do about it, though, one of the most thoroughly researched findings in social psychology is that the more you reward someone for doing something, the less interest that person will tend to have in whatever he or she was rewarded to do. Another group of studies shows that when people are offered a reward for doing a task that involves some degree of problem solving or creativity—or for doing it well—they will tend to do lower quality work than those offered no reward.

That seems so contrary to our everyday experience. Everybody is used to getting rewards and giving them. What kids deserve is an engaging curriculum and a caring atmosphere so they can act on their natural desire to find out about stuff. No kid deserves to be manipulated with extrinsics so as to comply with what others want.

Moreover, motivation is something that kids start out with. But research shows that by the middle—or certainly by the end—of elementary school, this intrinsic motivation starts to tail off sharply—by an extraordinary coincidence, around the time that grades have started to kick in.

Skillful teaching involves facilitating the process by which kids come to grapple with complex ideas—and those ideas, as John Dewey has told us, have to emerge organically from the real-life interests and concerns of the kids.

Within that context, the skills necessary to figure it out become interesting to most kids. In the context of a task that matters to students, the specific skills we care about can be taught naturally without sugarcoating, without games, and above all without offering kids little doggie biscuits for doing what we tell them.

If I tell one of my staff members that he or she did a terrific job on something, am I giving a reward at that point? Positive feedback that is perceived as information is not in itself destructive and indeed can be quite constructive, educationally speaking.

And encouragement—helping people feel acknowledged so that their interest in a task is redoubled—is not a bad thing. But most praise given to children takes the form of a verbal reward, which can have the same destructive impact as other rewards: it feels controlling, it warps the relationship between the adult and the child—and between the child and his or her peers—and it undermines interest in the task itself.

Second, the teacher has just turned a learning experience into a quest for triumph. She has introduced competition into the classroom.

Third, this is a fundamentally fraudulent interaction. Fourth, and possibly most important, I ask you to reflect on what is the most important word in that expression. Cecilia is not helped one iota to reflect on how her experience affects other people in the room or what kind of person she wants to be. On that point, I like to think about the questions that kids are encouraged to ask in different kinds of classrooms. What about less successful students?

A lot of educators feel strongly that they need even more praise than other kids. They need to be praised when they make the slightest bit of progress. No research supports the idea that praising children for inching up the adult-constructed ladder helps them develop a sense of competence. Indeed, praise for success at relatively easy tasks sends a message that this child must not be very bright. Moreover, children are not helped to find the material itself important or interesting if they are praised for doing it.

In general, the more kids are induced to do something for a reward, whether tangible or verbal, the more you see a diminution of interest the next time they do it. It seems to go against our everyday experience.

For example, I like it when people recognize me for an accomplishment of some kind. Yes, of course. We all want to be appreciated, encouraged, and loved. Now, I know a lot of adults who are praise junkies: sadly unable to think about the worth of their own activities and actions and products, and utterly dependent on someone else to tell them they did a good job.

That is the logical conclusion of being marinated in praise for years. The truth is that there are qualitatively different kinds of motivation.

I sometimes talk about the three Cs of motivation. The first C is content. The second C is community: not only cooperative learning but helping kids feel part of a safe environment in which they feel free to ask for help, in which they come to care about one another as opposed to having to be manipulated to share or not be mean. Some of the outstanding work on creating caring communities is being done by the Developmental Studies Center in Oakland, California.

You know, kids learn to make good choices not by following directions but by making choices. So what are you suggesting instead? 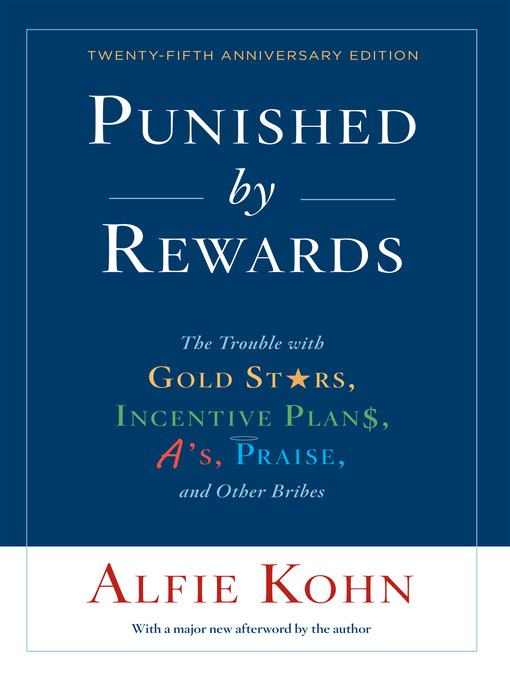 Punished by Rewards: The Trouble with Gold Stars, Incentive Plans, A's, Praise and Other Bribes

In classrooms where students can make choices about learning and have tasks of worth to explore, the need for punishments or rewards declines sharply. Both rewards and punishments, says Punished by Rewards author Alfie Kohn, are ways of manipulating behavior that destroy the potential for real learning. Alfie, we educators use punishment quite a lot, but we've come to understand that it's not a very effective motivation. We've been convinced that it's much better to use rewards instead.

We dangle goodies from candy bars to sales commissions in front of people in much the same way that we train the family pet. In this groundbreaking book, Alfie Kohn shows that while manipulating people with incentives seems to work in the short run, it is a strategy that ultimately fails and even does lasting harm. Our workplaces and classrooms will continue to decline, he argues, until we begin to question our reliance on a theory of motivation derived from laboratory animals. Drawing from hundreds of studies, Kohn demonstrates that people actually do inferior work when they are enticed with money, grades, or other incentives. Promising goodies to children for good behavior can never produce anything more than temporary obedience. Rewards turn play into work, and work into drudgery.

Any cookies that may not be particularly necessary for the website to function and is used specifically to collect user personal data via analytics, ads, other embedded contents are termed as non-necessary cookies. It is mandatory to procure user consent prior to running these cookies on your website.